“All stories are about wolves”: Thoughts on the Northern Gateway Pipeline 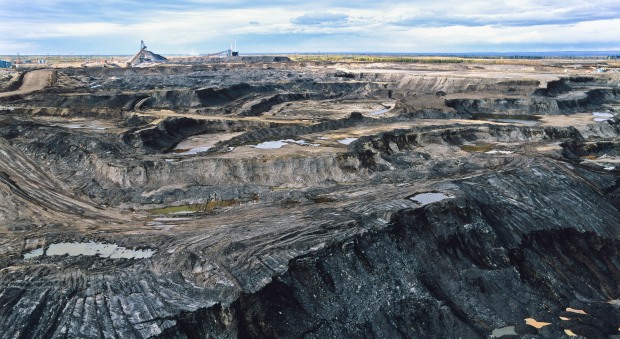 It’s the scale of it all that first assaults the mind.

Four and a half minutes into his January 9 TEDx talk – “The true cost of oil” – Garth Lenz projects an image of a 400 ton dump truck loaded with bitumen from the Alberta tar sands. A man of average height, Lenz reports that if he were standing in the frame, the top of his head might just reach the bottom edge of the truck’s hubcap.

In the next image, trucks of this same dimension are reduced to the size of a pixel, rendered invisible against a vast landscape of gored earth and deep-cut sludge.

As scale is the first assault, urgency is the second.

Urgency, because those monster dump trucks are hauling away the rubble of a once-teeming ecosystem at a mind-numbing rate. Three million barrels of oil are extracted from Canada’s tar sands every day.  By my calculation, that’s just over 4000 barrels in the time it will take you to read this post. For every single one of those barrels produced from surface mines like the one shown in this image, two tons of Boreal forest is decimated, all living matter to a depth of 75 meters stripped bare.

By some unfathomable logic, the value of the Boreal is measured out in barrels of oil. It is like calculating the value of human life by the weight of vital organs. There’s a good price to be fetched for tarry bitumen, once relieved of its “overburden” of trees and water, peat and soil. Never mind that those trees and peat filter more greenhouse gases than any other ecosystem on earth – twice as much per acre as the tropical rainforest. Never mind that the Boreal hosts more than 80 per cent of the world’s liquid freshwater.

If there is a good enough price to be fetched for kindling, do we take a bandsaw to Picasso and Monet?

The proposed Northern Gateway Pipeline promises to make the extraction of tar sands oil considerably more profitable. That is its most compelling justification. It is also the reason that this pipeline must not proceed.

“All stories”, wrote Margaret Atwood, ”are about wolves”.

The story of a pipeline that will transport half a million barrels of petroleum product daily from Alberta’s tar sands to offshore global markets is, ultimately, just another story about wolves. At the heart of the story is the question of allegiance.

It is time for every one of us to declare our place in this story. It is time to choose our wolf pack. The Review Panel is listening. My letter of comment is here. My sources are here. I hope you will join the chorus.